Power of Pink and Side-Out Team Up for Impactful Weekend

“We’re really excited about partnering with The Side-Out Foundation this year,” said Tyler Carey, creator of the Power of Pink Tournament. “It’s a volleyball-related foundation and their story is something that you can tell the kids about at the tournament and you can’t help but get goosebumps just talking about it.”

This is the first year that donations from Power of Pink will benefit The Side-Out Foundation. The Power of Pink Volleyball Tournament is one of many events the Queensbury school community will host this October. Other events include a cross country meet and three other volleyball tournaments.

“Power of Pink is starting to take over the whole campus with everybody doing something as part of it. It’s something that this whole community wants to get behind.”

“This started as a single game and to see how much it has grown over the years is exciting,” stated Carey. “Power of Pink is starting to take over the whole campus with everybody doing something as part of it. It’s something that this whole community wants to get behind. When this all started, I felt like it was something I could make happen. My aunt is a survivor and my grandmother is a two-time survivor. It seemed there were a lot of people affected with some sort of cancer. After hearing stories and talking to those people, I felt like if there was anything I could do, I was going to try and do it.”

Admission into this year’s tournament is free and attendees can show their support by making donations at the event or online, purchasing concessions or t-shirts and taking part in raffles at the event. Queensbury volleyball will be accepting cash or check donations as well as donations of raffle prizes for the day. Carey expects between 500-1,000 people at each match. No matter the attendance, he is hoping that the real spectacle comes in the time between pool play and tournament play.

“I’m really looking forward to the moment of the tournament when we bring all the kids, parents and fans into the gym and we honor someone who has passed, is a survivor or is still fighting,” said Carey. “This year our honoree is teacher Tina Bureau who went through some clinical trials and is now in remission. We also do a presentation of the trophy (a trophy that Tyler made himself) and the team that raised the most money that year gets to pass it around and hang onto it for the year.”

Last year, the tournament raised more than $33,000 for cancer research. A successful event for Carey at the end of every tournament isn’t just about how much money was raised. It is about the memories outside of the volleyball play. “The moments that are experienced at this tournament are memory-makers for everyone. No matter how much money a team raises in the year, we always hear from the girls how cool of an experience it was to be part of a tournament like this and they see they can make a difference.”

If you would like to donate to the Power of Pink Tournament, visit the campaign page here. 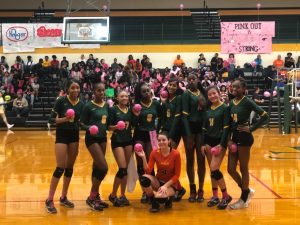 Side-Out & Dig Pink: A Mission Beyond Me 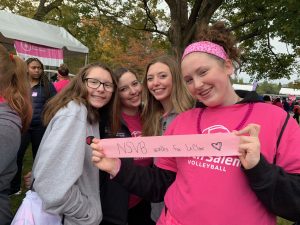