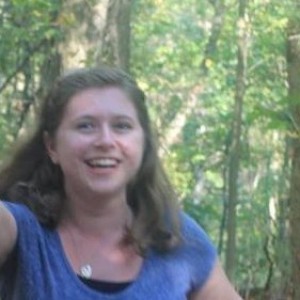 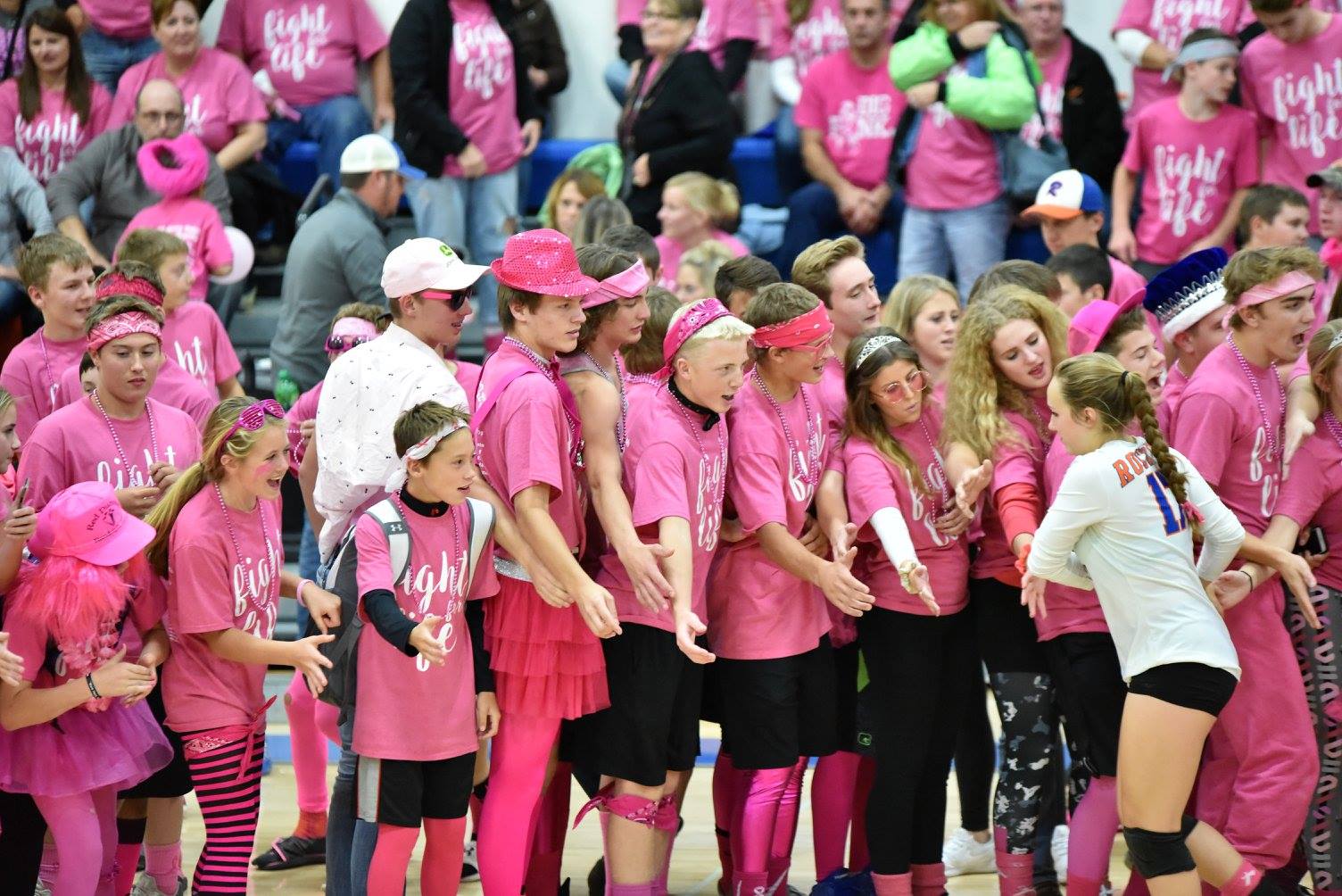 As you walk into the gym of Randolph High School on the night of its annual Randolph Dig Pink festivities, you’ll notice there is a buzz around the event. It’s the talk of the town, a town of fewer than 500 people. But don’t let the small population fool you, this is a town with a big heart.

The Value Of A Moment

The moment the ball hits against the waxed hardwood… when the sea of pink in the stands rises… when the final amounts from the night are announced… the moment a smile of hope spreads across your neighbor’s face, that’s when everything becomes an unforgettable memory for those attending.

No one can put a value on these moments during Randolph High School’s 2017 Dig Pink event.

Sure, they raised over $18,000 for The Side-Out Foundation to support stage IV breast cancer research and Regan Nordling, a second-grader who needed a second heart transplant. However, this doesn’t show the true value of the moments shared through Dig Pink – how priceless these moments are to the town located 40 miles south of Minneapolis.

“I took a lot of pride in what we had built,” explained Esser.

Esser encouraged all her students to “take pride in what [they] do every day.” She pushed them to take pride in the fundraising they achieved through their Dig Pink events, providing stage IV breast cancer patients with treatment opportunities specifically tailored to their cancer in the hopes of prolonging their life.

The students, fueled by Esser’s positive energy, embraced the chance to make a difference. In a Minnesota town of fewer than 500 people, the students did not let their small numbers stop them from making a positive impact.

“I love seeing them take pride in something that is so important,” said Esser.

The importance of Randolph’s Dig Pink event stretched beyond breast cancer and volleyball and rebounded through their community.

Randolph’s Dig Pink event is rooted in the community. At their 2017 event, they honored Kathy Bey, a volleyball mom, and breast cancer survivor. They also played in memory of friends and family who fought breast cancer, specifically: Jenny Ralph, Esser’s in-law and a donator to Randolph Dig Pink, and grandmothers of volleyball players, Judi Bay and Linda Londor.

Beyond recognition, each Dig Pink event has the opportunity to donate 25% of its Dig Pink proceeds to a patient support services organization in their area. For Randolph High School this means there’s an opportunity to help a member of their community while contributing to the nationwide impact of Dig Pink.

“We have only sponsored two people at this point in our history but it takes the night to a whole new level when certain members of your community are involved,” said Esser.

In 2015, Jackie Hoey, a mom of a senior on the volleyball team was diagnosed with brain cancer. The community rallied behind Hoey and her family. Randolph raised money to support her treatment through their 2015 Dig Pink event. In fall of 2016, Hoey passed away and Dig Pink is now held in her memory.

In 2017, the senior class decided to sponsor a Randolph second-grader, Regan Nordling. Regan received a heart transplant when she was six months old and received a second one on June 30, 2018. During the 2017 Dig Pink event, signs with Regan’s brilliant smile and the words #ReganStrong filled the gym. Regan and family attended the 2017 event, cheering on their favorite volleyball team.

Making a moment personal brings an entirely different feeling to an event, especially when it is a national cause like Dig Pink. There is an unexplainable strength that comes from the support of an entire community. A strength with the power to ingrain a moment in your memory and make it priceless.

More Than A Memory

Randolph’s Dig Pink event is a memory tinted pink. Fundraising, led by the girl’s volleyball team and supported by parents, teachers, and community members, occurred throughout the night.

The 2017 event hosted a silent pink auction and bake sale. Local businesses and community members donated items for raffle drawings. The cheerleaders sold strawberry malts and the booster club sold pink cotton candy. One volleyball mom ran an informational stand about mammograms. A professional photo booth and DJ volunteered at the event. Community members even shaved their heads in honor of those fighting cancer.

Each year a unique Dig Pink event t-shirt is sold. During the event, all the previous t-shirts are displayed, reminders of all they have accomplished. With one eye on the past, Randolph pushes ever forward.

Randolph’s dedication led to the success of their event, and in 2017, Sports Imports and Side-Out announced Randolph High School as Side-Out’s top fundraising school in the nation.

“Being that we come from such a small community this is not the norm for our students,” said Esser. “No one can take away the success they have built in this event.”

Randolph has made its Dig Pink event more than just a match, more than memories. They have made a legacy.

“The wheels are always turning in my head as I prepare for the following year,” said Esser. Everyone is involved in the planning for the next event, keeping it fun and engaging the community. In light of their last event, Randolph High School set a new goal for their Dig Pink events – $100,000 in 10 years.

With a goal set and 2 years to go one thing is certain – they will never forget those moments. 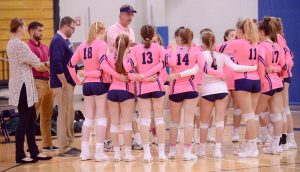 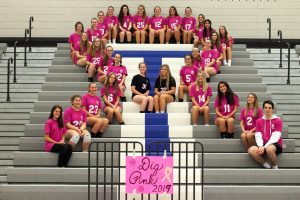