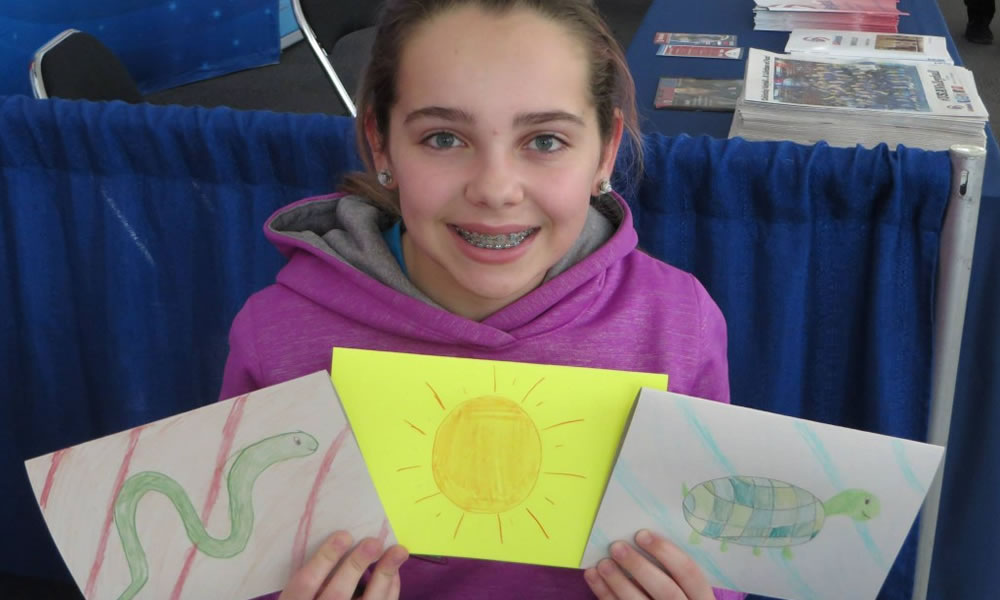 At each of the Dig Pink® Tour stops this season, The Side-Out Foundation booth has had a card making table available for players, siblings, parents, coaches and friends to sit down and create hospital cards for cancer patients. We have collected a few hundred cards and many tournament attendees have had fun making cards in between matches. 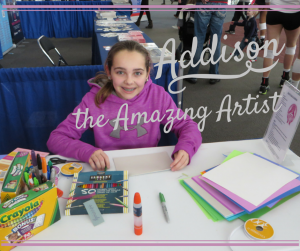 During the second weekend of the Colorado Crossroads tournament, we had a quite a few people join our booth to make cards, but one individual in particular stood out among the rest. On Saturday afternoon, a young girl approached the Side-Out booth while staring at the table hidden beneath a layer of construction paper scraps, markers, scissors, and glue. After saying “hi”, we asked if she wanted to make any cards for patients, to which she quickly nodded yes and sat down at the table.

Little did we know at the time what Addison, 12, was about to accomplish.

After thinking for a moment, Addison took out the colored pencils and began drawing on the front of a card with a very determined look on her face. While sitting there quietly, time began to pass and the pile of cards next to her began to grow. In between cards, she would appear to be thinking hard about what she wanted her card to look like. I thought to myself, “This girl is serious about her card making. We need more people at this table like her!” 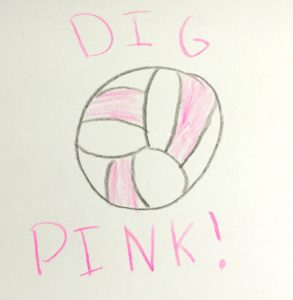 Julie and I stood up as Addison gave us her cards, and we were amazed! She had created NINE cards which were all cleverly designed. Many had an animal drawn on the front along with a message inside. One of her cards showed the face of a lion on the front while inside the card read “Liam the Lion would LOVE to make you smile!” Another pictured a hippo saying “Henry the Hippo Hopes He makes you Happy! Addison does too.”

Other cards included some cute jokes such as “What did one ocean say to the other ocean? Nothing, it just waved!” All of Addison’s cards included her own signature on the back of the card, which was a pink and white volleyball and the words “DIG PINK!”

After looking through the cards, we let Addison know what a great job she had done and thanked her. Her parents came back to the table and Addison went on her way.

Addison’s cards have made all of us at the office here in Fairfax smile. We know that when her cards make it into the hands of different patients, each of them will light up with a smile too. I hope that this post reaches Addison just so she can know that we here at The Side-Out Foundation appreciate what she has done and thank her for sitting down and making some of the most amazing cards of this project.

We also want to thank everyone else who has turned in cards and raised funds to this point. Your efforts are greatly appreciated and will help make a difference in the lives of many.

If you still would like to be a part of The Assist Project, you have until March 31st. Be creative with your cards and remember to make them stand out like Addison’s! 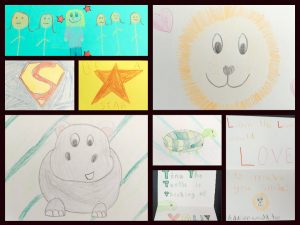