How Entry Fees Made all the Difference in Chicago 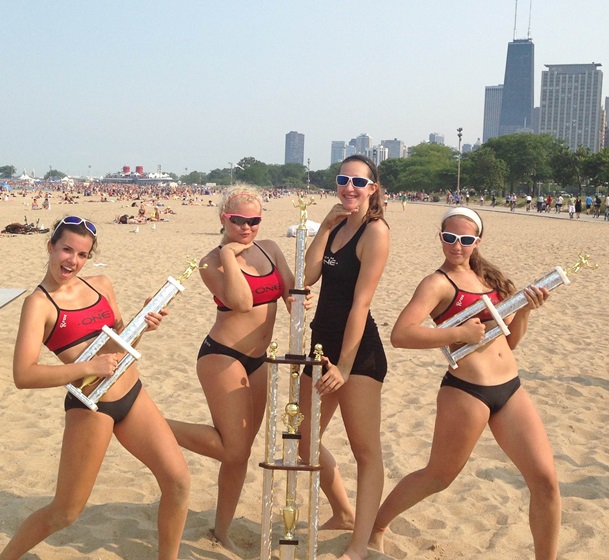 Summer is always an exciting time for the volleyball community. It is peak season for beach volleyball tournaments around the U.S. From coast to coast, the excitement of these competitions brings communities together to enjoy participating in and watching this exciting sport.

With the crowds of people, the record keeping, and communication between coaches and teams, it is hard to imagine beach volleyball tournament organizers can focus on something like fundraising for stage IV breast cancer research. However, The North Avenue Beach Club does just that. For the last three summers, The Beach Club’s Girls outdoor doubles beach volleyball tournaments in the Chicago region have supported The Side-Out Foundation by taking simple steps to turn its program into a fundraising opportunity for Side-Out and its mission to support research and the development of treatments for stage IV breast cancer.

The Beach Club, with its decade-long tradition of hosting the largest, most competitive juniors beach doubles tournaments in the midwest, devised an ingenious way to play for a cause outside of the traditional Dig Pink fundraising tactics; i.e. bake sales, t-shirt sales, etc. As part of registration, 30% of the team entry fee is donated to Side-Out. Further donations are raised through a raffle; top prizes include Chicago Cubs bleacher tickets and Chicago Bears 50-yard line tickets!

Bill Yedor, one of the tournament directors, started the juniors tour nearly a decade ago by setting aside a few courts for high school girls in the Beach Club’s renowned adult tournaments. “I felt this was a way to give young girls a place to compete outside of their local clubs and schools,” said Bill. Demand exploded, and within four years the girls’ division took over the program. These days, The Beach Club Tour is exclusively for high school girls.

Teams come from all over the midwest to play in The Beach Club tournaments. While the format and prizes at each event are the same, the atmosphere varies greatly from venue to venue.

“The suburban events tend to be laid back. Fewer teams, easy access, free parking and catering by Jimmy John’s give these tournaments a more intimate feel, like an extended family picnic,” described Bill

In contrast, the tournaments at North Avenue Beach are high energy all the time. As Bill explained, “North Avenue Beach is inundated with intense, highly competitive players. Add to that the beach going throng – a mass of humanity celebrating summertime at one of the world’s most beautiful and vibrant beaches backed by an amazing city skyline, and you have an intensity that is electrifying. Having said that, some players, as well as parents and coaches, find this venue quite intimidating.”

Organizers of other multi-team events and tournaments can take a page out of The Beach Club’s fundraising playbook. The tournaments in Chicago highlight the importance of bringing the local community to these type of events. Sure, not all tourneys can take place in buzzing metropolitan areas like Chicago, but some of Side-Out’s most successful fundraising events are ones that take advantage of local outreach for sponsorships, prizes, and more.

For tournaments, donating a portion of the team fees is a perfect way to increase an event’s social impact without causing too much stress during match play. It is also a great opportunity to provide information to the teams concerning the impact of their donations. Side-Out provides plenty of materials for organizers to print out in order to spread the word about what the volleyball community is doing for stage IV breast cancer research.

An Even Brighter Future

Bill noted that The Beach Club’s tournaments fill quickly, but he believes there is still room for growth. He hopes to someday have these tournaments televised. This would spread awareness of the Side-Out Foundation’s programs and would bring in additional revenue – perhaps from commercials, perhaps from increased donations.

There is no question that planning multi-team events at multiple locations throughout a long season are difficult. Incorporating charitable fundraising into that program increases its complexity, but the tournaments hosted by The North Avenue Beach Club proves that combining tournaments with fundraising for Side-Out makes these events all the more valuable; they’re raising money for a good cause and they’re increasing the awareness of Side-Out’s mission. Not only are the Beach Club tournaments fun, but they also empower youth through the sport of volleyball to make a positive impact in the lives of others.