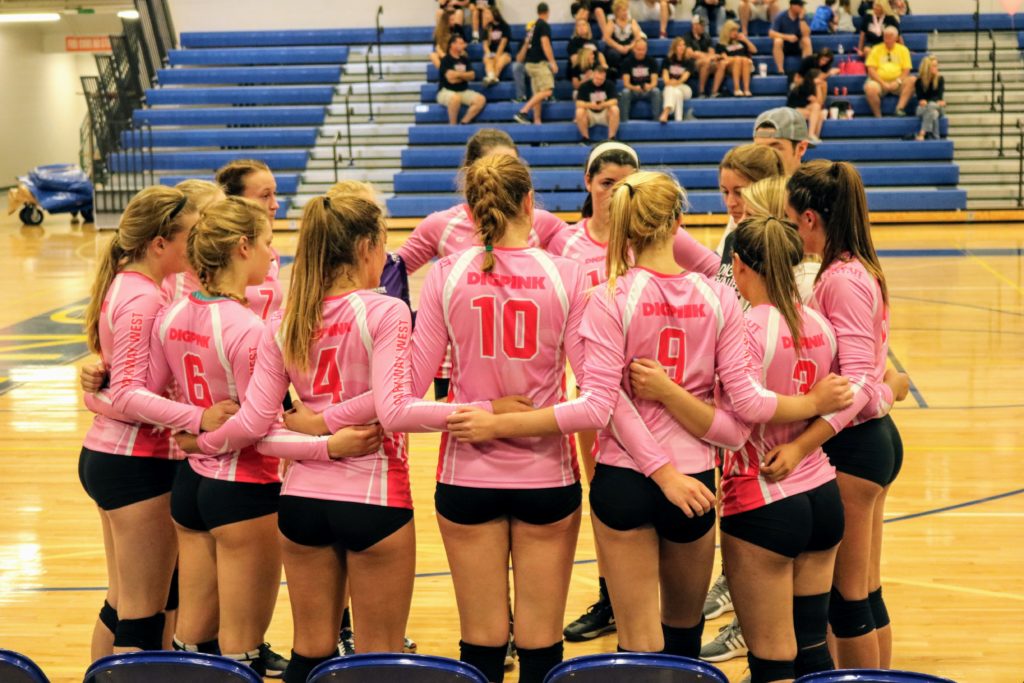 The Dig Pink Challenge Powered by All Volleyball is a fundraising event centered around a volleyball match, featuring local St. Louis high school teams. The goal is to bring the community together in a fun-filled day to raise funds and awareness for The Side-Out Foundation, the only organization using volleyball to raise money for stage 4 metastatic breast cancer research!

This year, All Volleyball turned it up a notch! Instead of a single match, we gathered 6 teams to play 3 matches, all with the same mission: playing volleyball for a purpose to raise money for The Side-Out Foundation.

View the announcement of the final number below!

One of the coolest moments was the presentation of the uniforms. The owners of All Volleyball, along with a member from The Side-Out Foundation who flew in for the event, met with each team to give them special, custom sublimated Dig Pink jerseys as a thank you for participating and raising money. These jerseys also feature special decoration honoring The Side-Out Foundation to help spread the word about them even after the event.

In addition to the volleyball matches, All Volleyball set up fun for those attending too! Those attending could pick up some snacks from the concession stand to eat while playing carnival games, posing for the Pink Out Photo Booth, bidding on the silent auction items or testing their luck at the 50/50 or raffle baskets!

This event truly was a labor of love for All Volleyball. To bring 6 teams together, to organize 3 matches and get everyone excited toward one mission is hard. But when that final whistle blew, it was worth every moment spent. To spread the word about The Side-Out Foundation to 6 teams-worth of people and their friends and families and raise a substantial donation doing it, is a privilege that we, here at All Volleyball, hold dear to our hearts. 6 Teams. 3 Matches. 1 Mission. The mission doesn’t end with this event, it is still going on and we’d love to have you help us!

To learn more about the Dig Pink Challenge, powered by All Volleyball, visit DigPinkChallenge.com.

The Side-Out Foundation is a non-profit organization based in Fairfax, VA that harnesses the power of volleyball players to host Dig Pink® volleyball tournaments that raise money for critical research of late stage metastatic breast cancer – the least funded form of breast cancer scientific studies. In 2016, a total of 765 different high school, college and club teams from coast to coast contributed $1,138,337 to Side-Out’s directed clinical trials which take place at leading cancer institutions in the United States. This grassroots campaign raised more money in 2016 for the breast cancer cause than individual efforts staged by multi-billion dollar leagues like the NFL, NBA, MLB or NHL. Two-time Olympic Beach Volleyball medalist April Ross, who lost her mother to breast cancer, is an advocate for the charity. Over the years, Side-Out has raised more than $12 million for research on the disease, has completed two successful clinical trials using Side-Out’s individualized treatment protocols and is currently in the midst of a third trial, it’s largest yet. Volleyball coaches across the country use the events as a team building experience that also reinforces the role sports can and should play in supporting athletes’ communities off the court. Most matches take place in the fall in conjunction with October’s designation as Breast Cancer Awareness Month. For details check out https://side-out.org/.