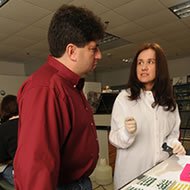 The Side-Out Foundation’s pilot study is part of a cutting-edge approach to personalized medicine that looks beyond genomic analysis alone to combine it with what some say is the next frontier in targeted therapy: proteomics.

The pilot study is the first of its kind to utilize novel protein activation mapping technology along with the genomic fingerprint of cancer as a way to find the most effective treatment. The trial was announced at the annual meeting of the American Society of Clinical Oncology and is expected to expand into phase two this month.

“Standard chemotherapy had failed the 25 women who participated in the 2.5-year pilot study”

In every case, molecular profiling guided oncologists to a treatment that otherwise would not have been prescribed, says Nicholas Robert, study co-author and oncologist at Fairfax-based Virginia Cancer Specialists. The pilot study showed that nearly half the patients had at least a 30 percent increase in “progression-free survival,” which is the time between or during treatment that the cancer is not growing.

“The idea is to turn the tables against cancer by using molecular profiling,” says Robert, adding that some patients had improvements of four to six months of progression-free survival.

“When I first began this trial I was at the end of the breast cancer chemotherapies they had available at the time,” says Carolyn Walla, a study participant who has lived with cancer for more than 15 years. “I was not getting better. I was getting worse.”

That extra time means the world, says another Side-Out study participant, a Northern Virginia resident who was diagnosed with breast cancer 24 years ago when her children were 1, 3 and 5 years old. She recently attended her youngest son’s law school graduation.

“Every time a drug gives me more time, it gives my family and me hope,” she says one May morning before going to chemotherapy. The breast cancer became metastatic in 2001.

It also means new research could be available for patients. “Twenty-four years ago, the options available to me now were not available to me then,” says Deborah, who asked that her last name not be used.

Patients are fighting dwindling returns with each new round of treatment. As cancer progresses and patients go on new drug therapies, the length of time a new therapy stops the cancer from getting worse decreases each time. For example, if a patient responded to one drug for 100 days, the next round of treatment with a different drug typically would keep the cancer in check for less than 100 days and continue to decrease with each new drug therapy.

The Side-Out trial’s goal is simple: Successful treatment meant patients had to show an increase in progression-free survival of at least 30 percent, Petricoin says. Researchers wanted to give the patients more time, and they did — the 30 percent threshold meant 100 days became at least 130 days without tumor growth.

Novel technology developed by Mason researchers was used to analyze if the protein drug targets were activated in each tumor. Drugs attack proteins, not the genes, to combat the “molecular defect” that leads to cancerous tumors, Petricoin says. In the past, doctors treated cancer based on their location, not their molecular makeup.

The molecular approach opens up new therapies. For example, if a breast cancer tumor shares the same protein pathway activation found in lung cancer, then the drug developed to hit that target for lung cancer can be used now for breast cancer, Petricoin says. The pilot study included only FDA-approved drugs currently on the market. Additional studies are expected to fold in new drugs as they become available along with experimental drugs, he says.

While Mason researchers unraveled the protein activation maps of the tumor, researchers at Phoenix, Ariz.-based Caris Life Sciences tackled its genomic profile. The two-pronged approach gave the treatment selection committee crucial information on which to base innovative treatments, Robert says.

Speed was essential, Petricoin says. “If you’re dying of metastatic disease, you can’t wait months for the test results,” he says.

“I think Lance and Chip went the distance to make this happen,” Robert says of the study results.

The family of Gloria Dunetz, who died from breast cancer in 2010, started the Side-Out Foundation in 2004 as a way to raise money for breast cancer research. Dunetz’s son, Rick, is a volleyball coach. Side-out is a volleyball term that describes how one team regains the serve or control of the play by scoring a point while its opponent is serving.

As fund-raising increased, Side-Out wanted to promote new research to make a difference in the lives of patients, says Dunetz’s husband, Bryant. “We’re treating patients in real time — something that hasn’t been done before anywhere in the world,” he says.

Using molecular profiling to target cancer could have far-reaching effects, says Robert, who was Gloria Dunetz’s doctor. “It’s a story that’s being told as we speak,” Robert says. “We don’t know where it’s going to take us.”