#WillToWay: Working My Way Off the Bench 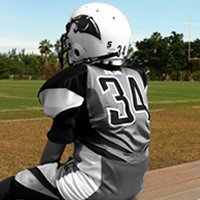 Football has always been a passion of mine. I am the kind of person who clears my schedule on Sundays during the fall just to make sure that I watch as many games as I can. If the Washington Redskins are playing, don’t expect me to be anywhere other than in front of a TV.

I am not just obsessed with watching however, I love playing too. Growing up, I can remember all the kids in my neighborhood getting together to play tackle football (without any equipment) in the big yard down the street. The problem was, my parents never allowed to play real tackle football for reasons I still am not sure of. No matter how many times I asked, the answer was always “NO”. But then I entered high school.

After asking about 1,000 times, I finally got my parents to agree to let me join the freshman team in the fall of 2006. I was so excited to finally be able to put my backyard skills to the test, but quickly realized that I had quite the obstacle in front of me.

Almost everyone on the team had experience playing football, yet I was still trying to figure out how to adjust shoulder pads. Many of the players had been watched by freshman coaches during their middle school seasons, but the coaches had no idea who I was. I had a long way to go if I wanted to even play a down, let alone start on the varsity squad one day.

I played receiver and after months in the weight room and practicing my heart out every day, our eight week season was halfway over and the most I saw the field was during warm-ups before kickoff. I was angry. Why would coach not even give me a shot?

We were in the third quarter of our 5th game and then I heard it. “Josh, get in. Run the snake!” This was it! My chance to get on the field had come and coach was calling my favorite play. After giving the huddle the play call, I lined up to the outside and took off at the snap. I ran the snake route (out and up) down the sideline. Our quarterback threw the ball up and I caught the 30-yard pass over my shoulder. After nearly tripping over my own feet and tackling myself, I regained my balance and ran the remaining 40 yards. On my first play ever in a football game, I scored a 70-yard touchdown. I could not believe what had just happened. All of the times running that play in practice had paid off!

I ended up joining the receiver rotation for the last three games of the season. I continued to work and prove myself over the final 3 years of high school in the weight room and on the field. I was fortunate enough to start my entire JV year and senior year of varsity after having never played football before high school. Although frustration almost drove me to quit, I didn’t. I wanted to prove to my coaches that I belonged on the team.

The reason I share this story is because there are many athletes out there who may be going through a similar situation right now. Sometimes your will to succeed is all you have and if you give up on yourself, why should others believe in you? Working hard and staying dedicated will get you to where you want to be, even if you hit some roadblocks along the way. Things will not always come easy, but with willpower on your side, you will be surprised what you can accomplish. Don’t give up; show others the power of will.