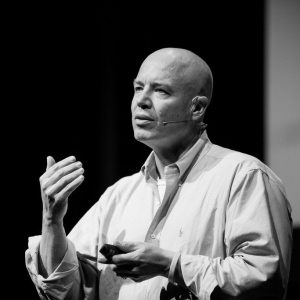 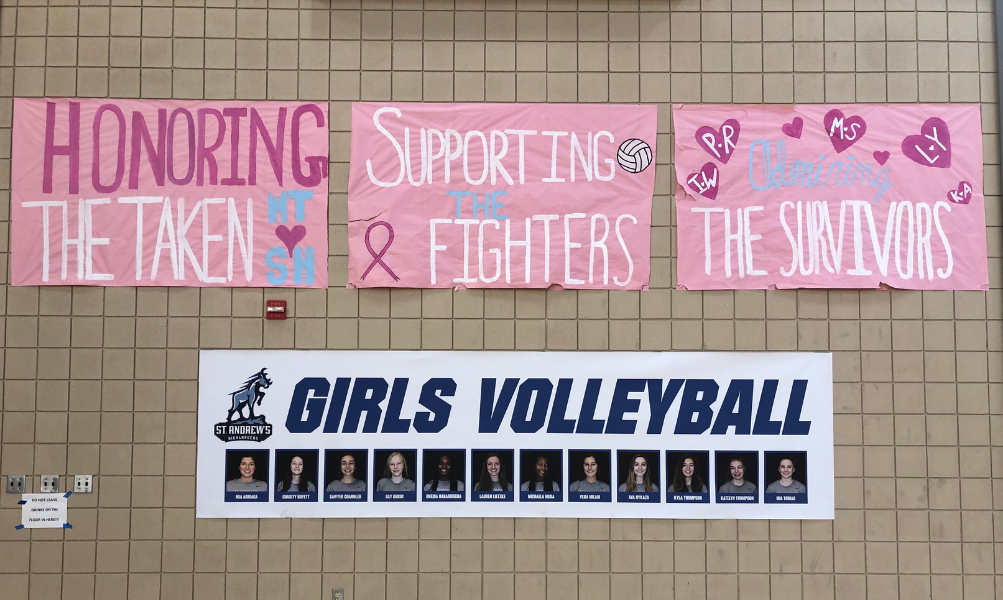 The sun was beginning to set. It had already been a very long day. Maureen and I had rushed from her oncologist’s office that morning in South Austin to Seton Hospital. Her sodium was dropping, and we needed her to be surrounded by all of the care and resources in the breast cancer wing at Seton. Not a half mile away, one of her daughter’s, Kyla, was about to start playing a volleyball game at her middle school. Maureen’s younger sister was on the sideline. iPhone in hand. FaceTiming.

Maureen and I were in her room on the 7th floor of Seton. My MacBook lid was up. Maureen, a volleyball player herself and captain of her high school team, was watching her “little” girl play. Kyla was already tall in 7th grade, just like her mom. As Maureen watched, I fed her little bites of Italian ice on a tiny wooden spoon to manage her hydration and sodium. She kept saying, “Finish the day. Finish the day. Finish the day.” 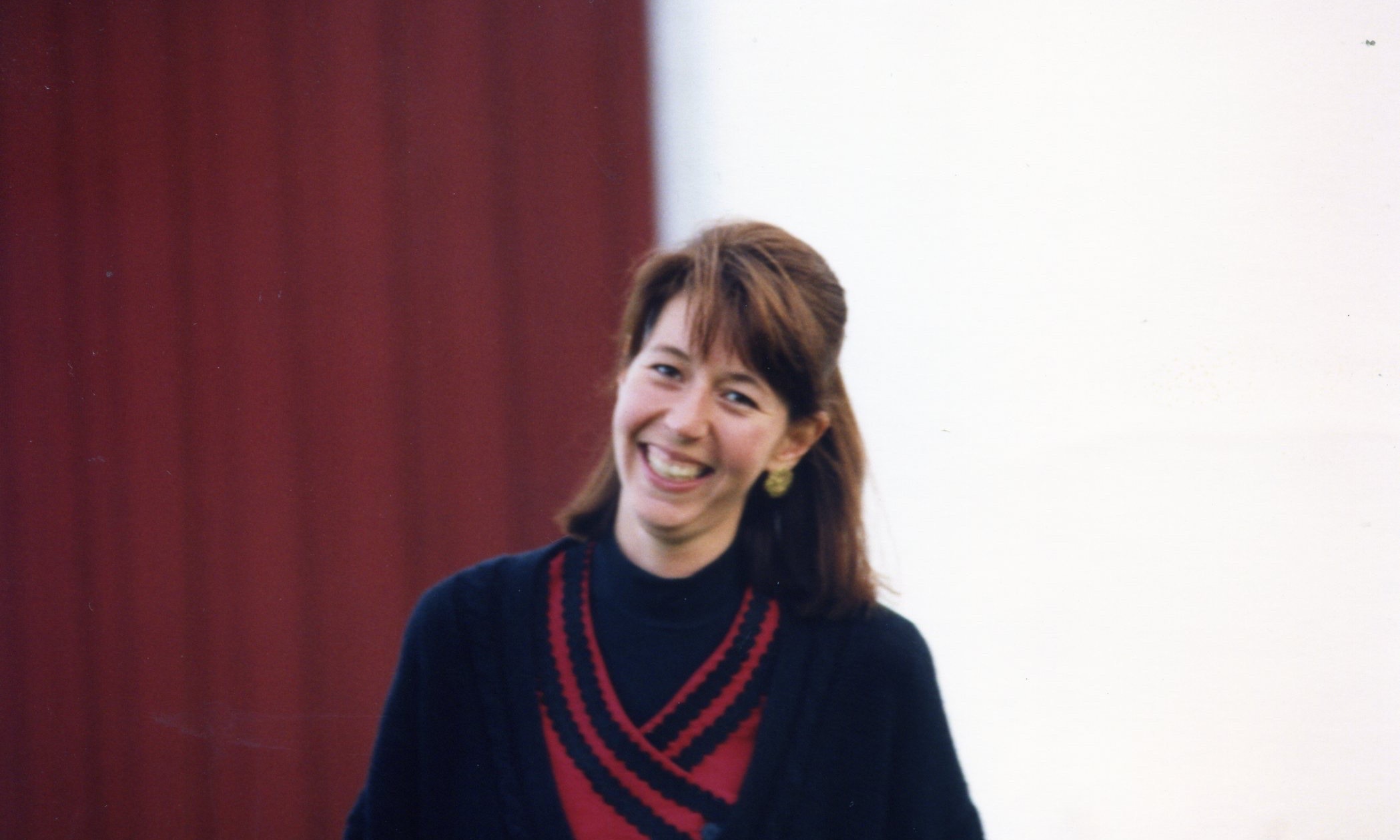 Watching that game was the last thing Maureen did on this side of heaven.

The next morning, in my very uncomfortable cot next to her bed at Seton, I awoke. I went to her side. I noticed the blow-by breathing tube had slipped down from her nose. Then, I realized something else. I burst into the hallway of the 7th floor. I’m not sure how loud I was, but I bellowed out, “my wife is no longer breathing!” That was the hardest day of my life as a father. After ten years on-and-off with breast cancer, diagnosed while pregnant with Kyla’s younger sister, Katelyn, Maureen’s breast cancer had metastasized in late 2013, reached her lung linings, causing pleural effusions, ultimately concluding that fateful morning of October 21, 2014. Maureen hadn’t just “finished the day” but had finished a journey that concludes in the same way for 44,000 women (and some men) every year.

It was a Tuesday. We were in shock. I had gone to my kids’ schools in the early afternoon to tell them their mom was gone. I cry as I write these words now in a way that I couldn’t cry then. As a father, I suddenly wasn’t just mourning the loss of the love of my life, my Maureen, but staring into the abyss. Planning a celebration of life for the upcoming weekend, sharing the news with family, greeting people at the airport. Time suddenly stood still. Until Thursday night. Two days after Maureen’s passing, heaven turned pink for one day. 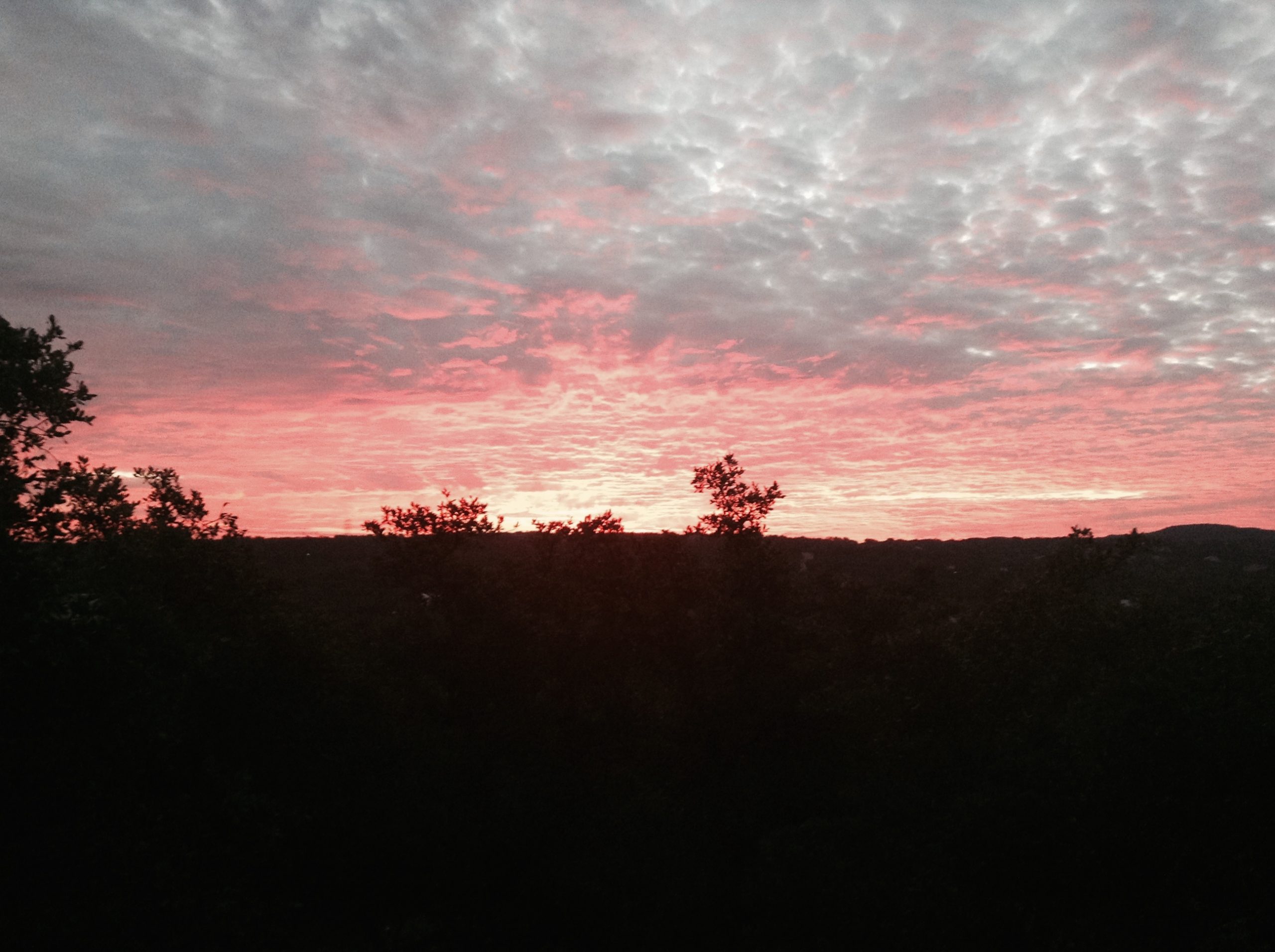 Our middle school team that Maureen had watched on Monday night via FaceTime in her hospital bed had another game. This time at St. Gabriel’s Catholic School. In the midst of chaos and uncertainty, we knew one thing. Kyla knew one thing. She was going to be playing three sets.

The morning after Maureen’s passing, all the kids and I were in the same bed. At likely the same time that she had passed the day before, I was awoken from my dreams by her love washing around inside of me. I told the kids exactly what she told me to tell them. I turned to Taylor and said, “When you were alone in the hospital room on Tuesday with your mom, after I had told you all the news, she heard you.” Then, before turning to Kyla, I went to our garage. Maureen and I had bought her a new volleyball the week before. I handed it to Kyla and said, “Mom wants you to know that every time you’re on the court, she will be playing next to you.” And, then finally, I turned to Katelyn, our youngest, who had quite literally saved her mom’s life. Had we not been pregnant with her, we would not have found the lump when we did. I told her that mom wants you to set your head on my heart, and “you’ll always hear my heartbeat in your dad’s heartbeat. It is how you will know I love you.”

Pink is the color of love, not cancer. 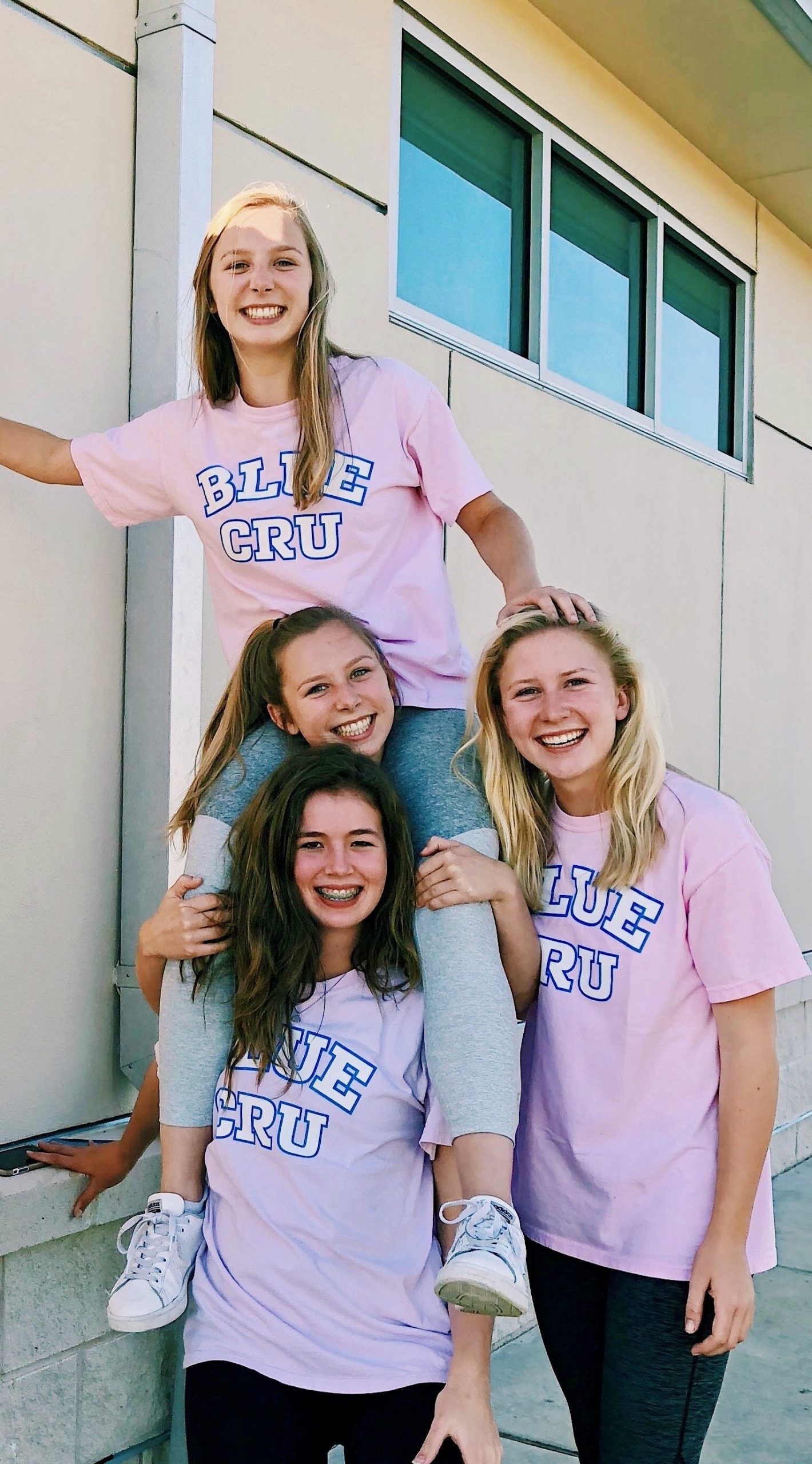 And, on Thursday night at St. Gabriel’s, pink was indeed the color of love. As our family walked in, the gym was a sea of pink. Each of the girls on Kyla’s team were in pink volleyball shorts, and each had a pink practice shirt on over their game shirts. These girls and their amazing parents, in less than a day, had come together out of love for Maureen and our family to put these wheels in motion. It was a deeply emotional and moving sight. Like I said then, for this night, pink was the color of love, not of breast cancer. 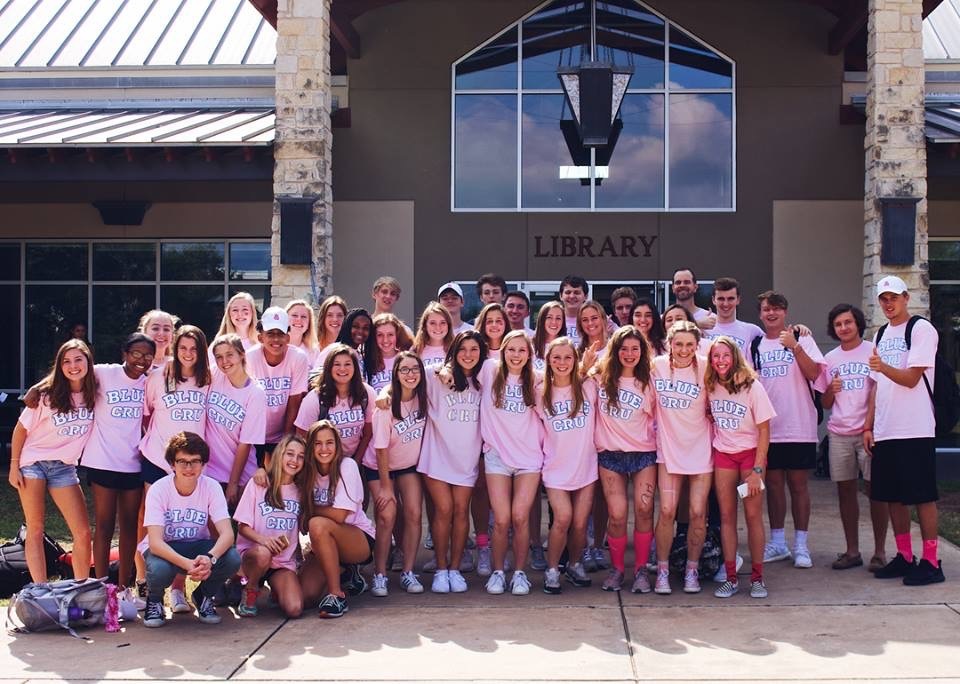 As the next few minutes unfolded, it was clear that this was not going to be a home game for St. Gabriel’s. It was instead going to be a home game for love. The varsity girls volleyball team from St. Andrew’s Upper School took the night off from their practice to come and support the middle schoolers, and almost every one of Kyla’s fellow 7th graders and their families were there, too. My heart was full. I know Maureen’s mom and dad were deeply moved (as were her whole family), moved by the love for their “little” girl, Maureen, and their granddaughter, Kyla. 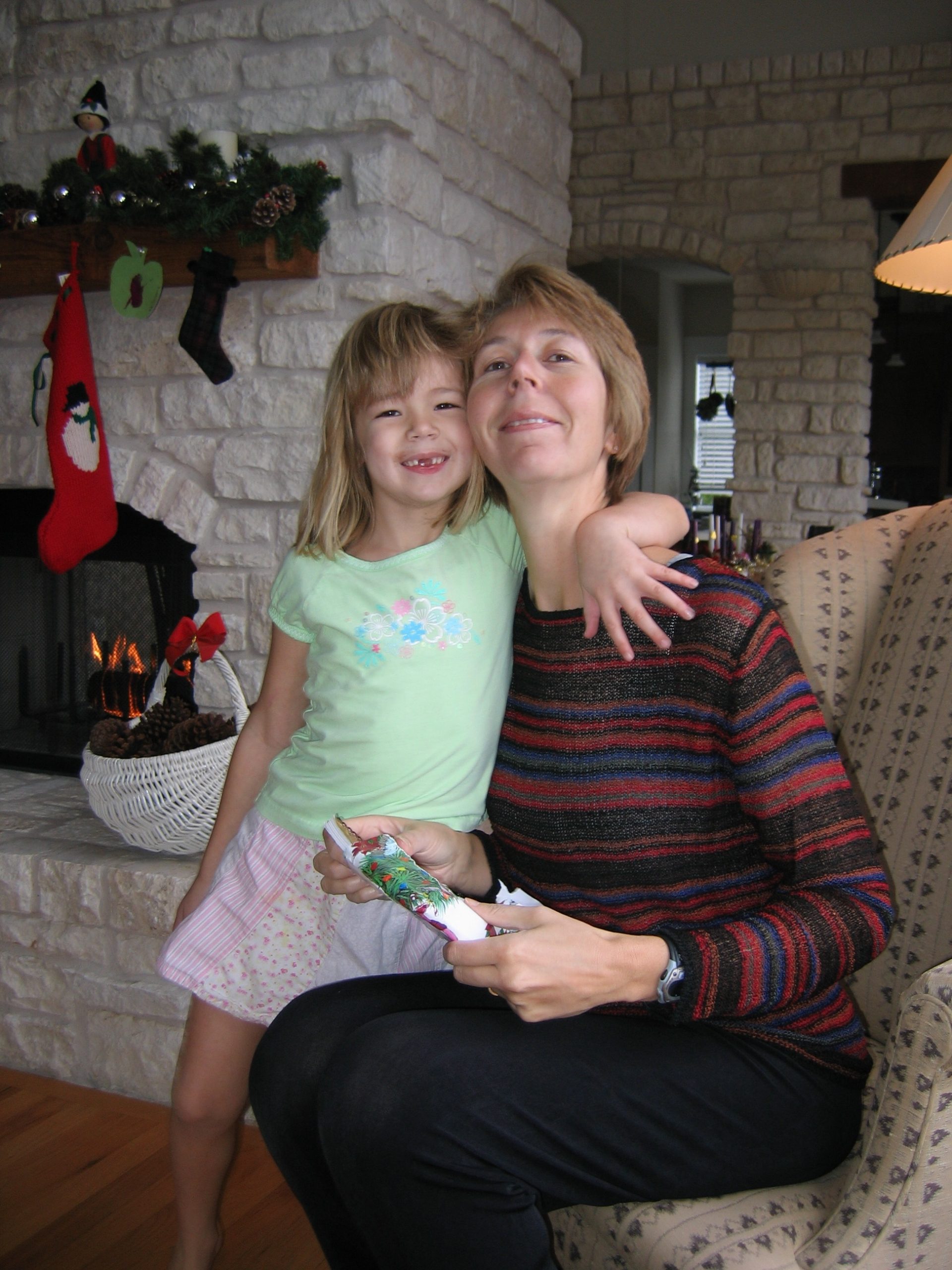 Even before the game started, this volleyball game allowed us all to say more than we could with just words. The game itself was as amazing as the outpouring of support. There was incredible talent on both sides of the net. St. Andrew’s and St. Gabe’s were tied in the standings. Each of the young ladies on both sides of the net was a terrific player. St. Gabe’s is a strong competitor, and they fought each and every point.

Before the game started, I had told Kyla that she didn’t need to win this game to honor her mommy, our Maureen. I told her to tell her teammates not only thank you but to just have fun. That said, you could tell something was different that night, for Kyla and for her teammates. 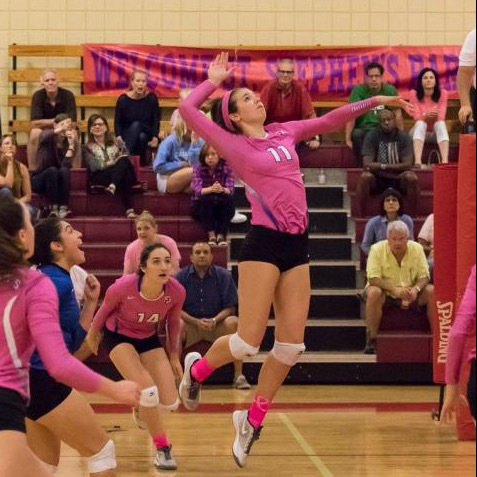 The game was a see-saw affair. The first set went to St. Gabe’s 25-22, and the second set went to St. Andrew’s with the same score in reverse, 25-22. This brought the match down to the final set, game three. I could tell my Kyla was inspired, as she leaped higher to get shots, and as she served more forcefully, with the force of love in the beautiful swing of her right arm, with her mom next to her. However, in this game, as with life itself, it is what we do together that makes all the difference. Every successful point in volleyball usually takes all three hits you are allowed on each side of the net, and on that night, each of Kyla’s teammates made sure that all three hits meant something. And, they will forever mean something. Kyla will be able to tell this story to her children one day, the story of the night that heaven was pink for one day. 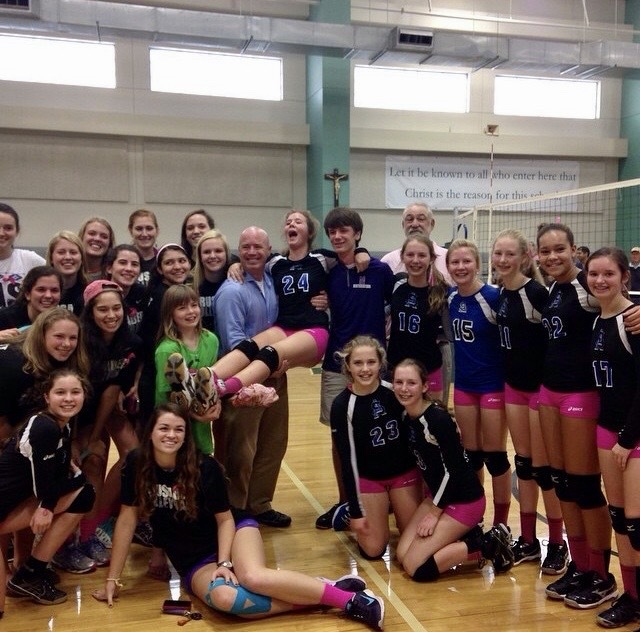 Two years later, Kyla joined her varsity team at St. Andrew’s as a Freshman. And, on another night, that year, the game was pink again. This time in support of Dig Pink®. I didn’t really know much about Dig Pink back then, but I knew that pink was the color of love. The mothers of three of Kyla’s teammates (two of whom are twins) were breast cancer survivors themselves, so the girls came together for their first Dig Pink game. 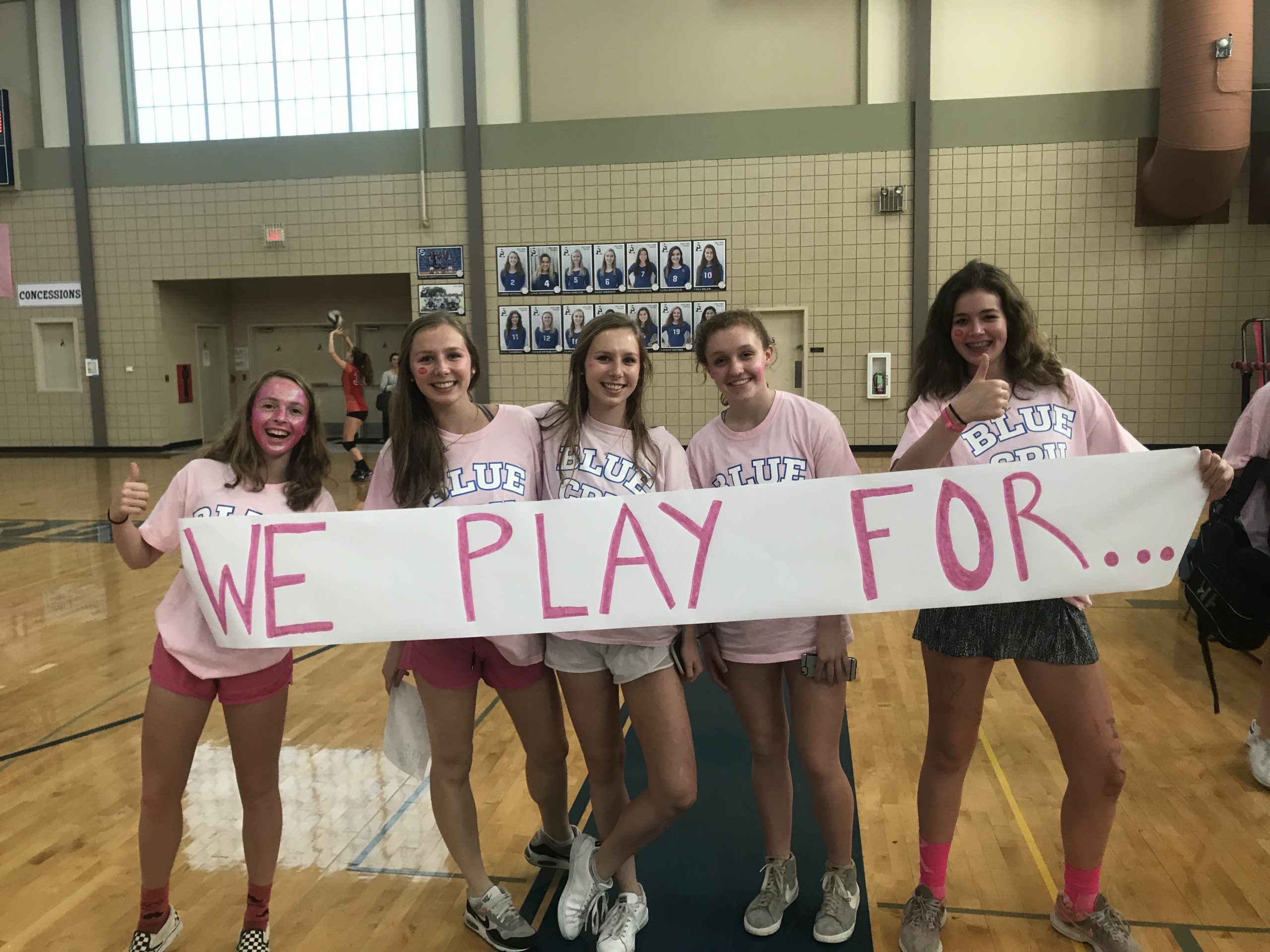 It has become a tradition, and over the last five years, the St. Andrew’s community has raised over $32,000 for the Side-Out Foundation. And in 2019, the Highlanders raised just over $14,000, making them the fourth largest fundraiser of all the schools that year. I have the privilege of saying a few words before each game, about Maureen, about love, about metastatic breast cancer, honoring the survivors in our midst, and saying thank you. 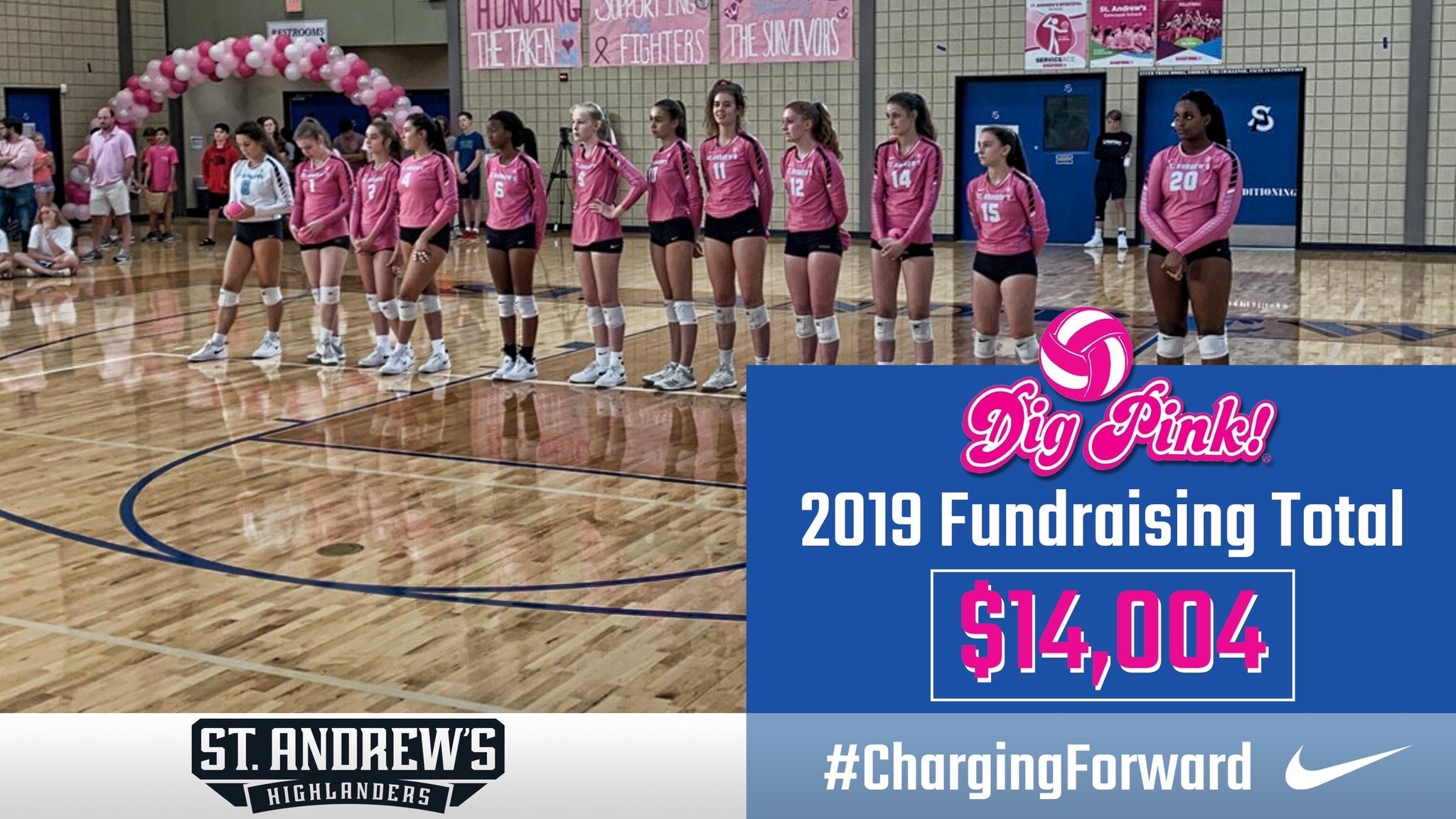 As a result of that record setting year, I’ve gotten to know not just the Side-Out Foundation better but Rick Dunetz, its founder. In the words of Dr. Seuss from The Lorax, “Unless someone like you cares a whole awful lot, nothing is going to get better. It’s not.” Rick Dunetz cares. A whole awful lot. Years earlier, the volleyball team he coached, rallied in honor of his mom, Gloria, just like Kyla’s team had rallied for Maureen.

The Side-Out Foundation brings together the two most important things to me, volleyball and metastatic breast cancer. I like one a lot, and I really dislike the other one. A lot. Bringing them together has the power to make things better. Make things better for 44,000 women (and some men) that die from metastatic breast cancer each year. Give them another day. Another set. Another match. Another chance to watch their “little” girl, or boy, play one more time. Attend graduation. See their kids off to college. Be at their son’s Eagle Scout Court of Honor. Have more tomorrows. 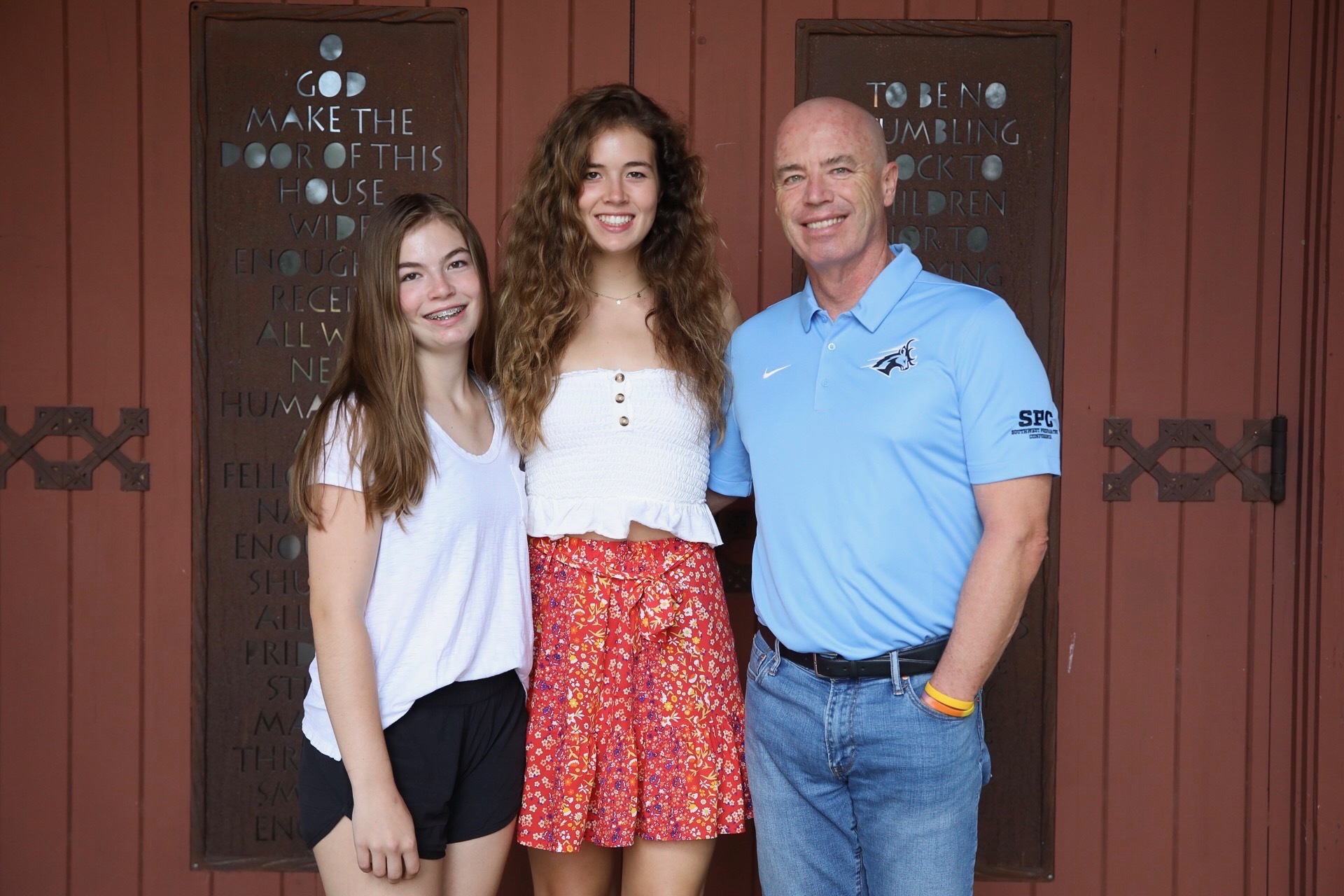 As Maureen finished her day, I made her a promise that night, not knowing it would be my last words to her. “I will never stop fighting for you.” A few hours later in the still of the night, we squeezed hands in our hospital room on the 7th floor of Seton Hospital, our way of saying I love you, without words.

I’m still fighting for her. The match is not over. Cancer is still playing, and it is time for the ultimate “side out.” It’s more than just a game. It’s life, and for a night, pink is the color of love, not cancer. 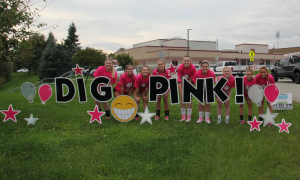